Tomorrow is St. Patrick's Day. I couldn't help myself. I wanted to share my favorite Wee Irish Kids, dressed for the occasion. 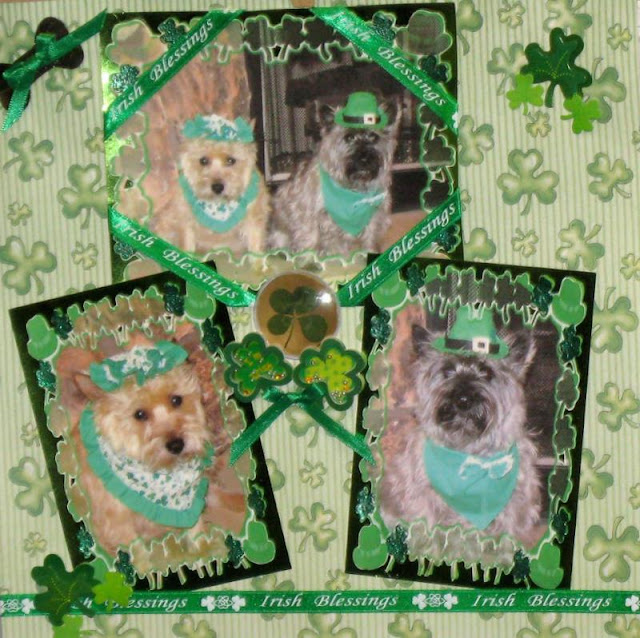 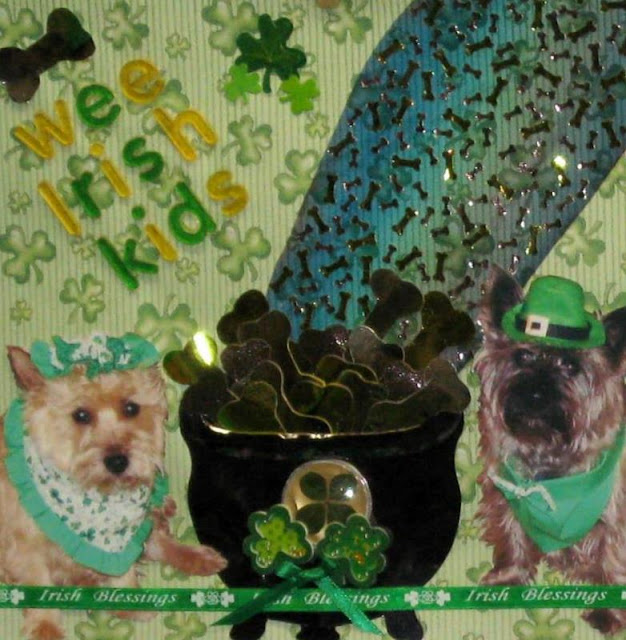 This is a two page spread. I made the little outfits. Skeeter is wearing a green felt top hat with black hatband and gold buckle. His outfit is completed with a green bandana, featuring a green shamrock bow tie, and a shamrock handkerchief in the breast pocket. Cindy is wearing a green print shamrock hat, with a green ruffle. Her outfit is completed with a green shamrock print bandana, with a green ruffle.
On the first page I used a photo program to make the shamrock and top hat border around each picture. Then I trimmed away the excess. I mounted each photo on green foil paper. I used ribbon like photo corners, to hold the pictures in place. In the center cluster of clovers is a real four leaf clover, that I found. I first pressed and dried the clovers. Then I carefully cut a large google eye apart. I traced around it and cut out a gold background. I glued the clover in place and then glued the dome over it. In the corner I cut out a gold foil bone and put a green bow in the center.
For the second page I enlarged a photo of each of the kids and cut them out. I printed a rainbow on vellum paper, cut it out and attached it to the page. I then drew a pot and rim. I cut these from dark gray metallic paper. Then I drew three different size bones, after all my kids would much rather have milk bones then gold coins. I cut them from three different gold metallic papers. I arranged them inside of the pot. I used two different size bone punches for the smaller bones in the rainbow. They are punched from the same metallic paper as the large bones in the pot. The bone in the top corner matches the bone on the companion page, as does the shamrocks, and the ribbon. The plastic lettering was brought at a craft store.
Happy St. Patrick's Day!

Thanks For Dropping In
Kathy