I joined the "Irish Swap" a couple of weeks ago. This was really a fun swap. The hostess was great! She did a great job of keeping us posted. It made it so exciting. I made three cards. These are the three cards that I made. 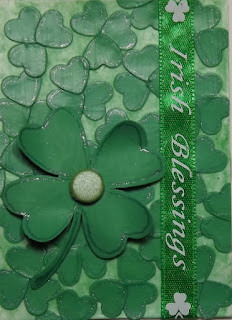 For this card I painted white card stock green. Then not having a clover punch, I sat and punched out little hearts and glued them together to make my clovers. Then I used a green gel pen around the outside edges of each shamrock. I coated the green base with Mod Podge and laid the shamrocks into it. After it dried I coated it once again with Mod Podge to seal them down. Then I cut out a four leaf clover from green card stock. I curled the leaves and outlined the edge with a green gel pen. I used a headless brad for the center. Then I attached a ribbon. 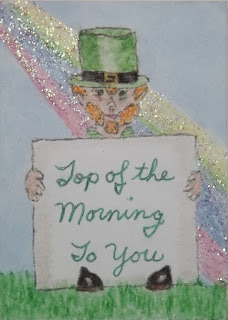 So many in this group are artists...not me, but I felt I should at least do one of my less than famous watercolors. This is it! I added glitter glue to the rainbow. 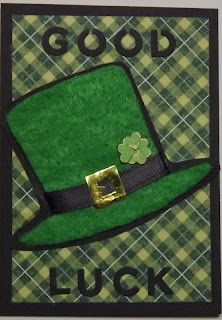 This card started with a black card stock background. I then cut green plaid scrap book paper and mounted it on top of the black. Next I drew a top hat pattern on paper and used it to cut out the green felt hat. I glued it to black card stock and cut around it leaving a narrow black border. I didn't have any black ribbon so I used a  permanent marker to color white ribbon black. Then I used a corner punch to cut tiny hearts to make the shamrock. I cut the gold buckle from paper and glued it down.

Drop In Again Soon
Kathy
Posted by Kathy at 5:00 PM