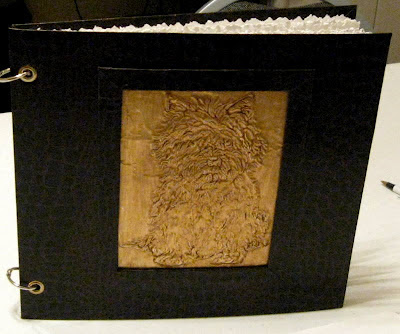 A short time ago I mentioned an art journal that I was making. Last night I finished it! I started this while I was sick and couldn't get down the stairs to my craft area. Not that it mattered. It was torn apart while being remodeled. Now I have a studio! Wow! Me, with a studio. 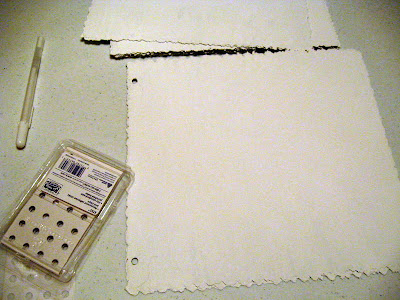 I started by tearing newspaper into 10" x 11". Everyone has newspaper. It comes right to your door. I used a Fiskar template to tear the decorative edge. I then covered the entire surface of  one sheet of newspaper with a glue stick, and then laid another sheet of paper on top. I used a wooden stick to rub them together. A few bumps and ridges are fine. They add character to the pages. Then I laid another on top and repeated the process over again. I did this ten times until I had a nice thick page. I made ten pages this way.  Then I  made two using only three layers to use on the inside of the front and back covers. It took a lot of glue sticks. My dear husband made numerous trips to the store for them. While they were drying I flipped them over every few days to help them dry evenly without buckling. After they were dry I gave them two coats of white acrylic paint. Then I punched holes for rings and reinforced them. These pages can now be used like canvases. 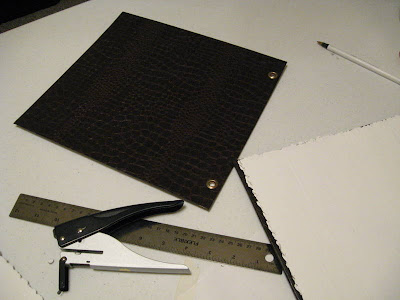 I then moved on to making the cover. I covered a 10 1/2" x 11 1/2" piece of corrugated cardboard with a gift bag.  I laid the cardboard on the bag and marked around it allowing 1" overhang to wrap around and attach to the back. I used Mod Podge to adhere them together.  I then adhered one of the white cover liners on the inside. This was the back cover.

The front cover was a little more detailed. I made a copy of a sketch of a cairn terrier that I drew and re-sized it using a computer photo program. I then printed it out to use as a pattern. I taped it to a piece of craft copper ( available at craft stores). Then I taped them down on a piece of craft foam. I carefully traced over the paper pattern using a ballpoint pen. My embossing tool was too wide. It lost to much detail. I removed the paper and there was my embossed cairn. I centered it on top of the cardboard that I had cut for the cover. I marked the outside edges on the cardboard. Then I added 1/2" to the inside edges and transferred it to the paper that would be the cover. I glued the copper embossing to the cardboard. Then I Mod Podged the paper and carefully centered it over the embossed cairn.  Then I turned it over and finished the back side of the cover using the white cover liner. I then measured and cut a chipboard frame. Yes, there is a frame. I know it is hard to see. I covered it with the cover paper being careful to finish it by wrapping the edges. I glued it over the embossed cairn.  After the cover was dry I marked the placement of the grommets. I used the kind used for tarps, sold in the hardware department. Unlike craft grommets, they come with the complete kit to both punch and install the grommets, and the grommets are finished on both sides.
I used one inch snap rings to put it together. What is nice about using snap rings is that you can take the page that  you're working on out, so that the other pages stay clean until you're ready to use them. Now it's ready for whatever media I decide to use. Maybe I'll just use it as a photo album.

I hope that you'll visit again soon.
Kathy
Posted by Kathy at 8:39 AM