A few weeks back it was unseasonably warm in Michigan where I live. In fact, on St. Patrick's day it was 84 degrees. A few houses down children were waist deep in the lake. Did that ever give me spring fever! I wrote on the ATC's list that I had spring fever and asked if anyone could host a spring card swap. You know, flowers, baby animals, even rain. Before I knew it one of our members stepped forward with two swaps. "Spring" and "Flowers". If she was both ambitious, and gracious enough to host two swaps at one time the least that I could do was join both. These are the cards from "Spring". 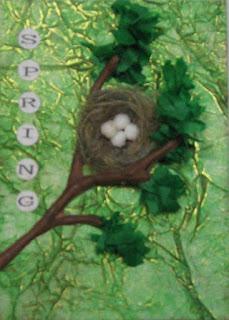 To create the background I covered white card stock with Mod Podge. I crumpled white tissue paper and then smoothed it out some and pressed it into the Mod Podge. After it was dry I painted it green with an acrylic paint. When that was dry I mixed Perfect Pearls gold into a small mister bottle and sprayed it over the green. When that was dry I used a brown ink pad and rubbed it gently over some of the higher ridges to create the illusion of branches. I thought that I could pick up a small branch and some moss from the yard for the branch and the nest. I was sadly mistaken. Both crumbled and turned to dust. So I had to figure out something else. I drew the branch with Puffy Paint onto freezer paper. When it was dry I peeled it off. Now that I had my branch it was time to make the nest. For the nest I cut twine and some yarn into two inch pieces and pulled them apart. Then I rolled them in my hand into a small ball. I pushed a pencil eraser into it to make the indention for the eggs. After spending far too much time trying to make eggs by pulling small pieces of cotton from cotton balls to make the eggs and ending up with assorted sizes and no two alike, I finally figured out the easiest way to make them was by cutting the ends from Q-tips and rolling them into little balls to use as eggs. The leaves were made by cutting three large paddle shapes from green tissue paper and then cutting into them on both sides. Then they were twisted and glued to the branch ends. For the smaller ends, smaller paddle shapes were cut from tissue paper, and glued to the branch ends. I used my old typewriter to spell out "Spring". I used a hole punch and then glued them to the page. 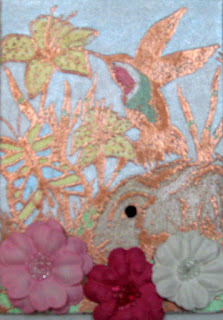 I used a rubber stamp for this card. I heat embossed it with copper embossing powder. I then painted it with pearl watercolors. This is a great technique. The embossing forms a raised barrier that helps keep the paint from running or smearing. I dropped a drop of black Puffy Paint onto freezer paper and when it was dry I peeled it up and glued it to the rabbit as an eye. The flowers were loose petals that I layered, then I put a drop of glue into the center and dropped tiny glass beads into the glue. 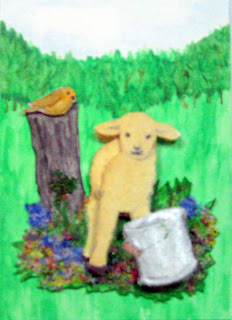