I joined a swap called Tiny Togs. This was such a fun swap. Making the tiny little clothes made me feel like a little girl again, playing with paper dolls. 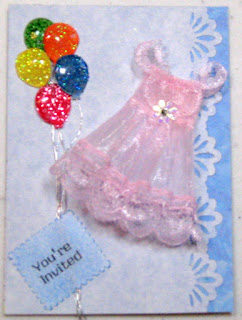 The little dress on this card was made using a piece of ruffled ribbon about 2 inches long. Using a low temp glue gun I put a small amount of glue on the back and folded each side in to make the bottom of the little dress. I then cut the scalloped edge from another piece of the same ribbon and glued it to the front of the dress taking it over and behind to make the top of the dress. I punched a tiny flower from a shinny gift bag and put a rhinestone in the center, and set it at the waist of the dress. For the background I chose a dabbled light blue scrapbook paper. Then I selected an even lighter blue and punched the edge and laid it on top of the blue paper. I punched small balloons in assorted colors of paper and covered them with matching color glitter glue. After they were dry I dropped Glossy Accents on them. I tied silver thread to each of them for their string. Then they were glued to the card. Using an old typewriter I typed "You're Invited" on copy paper. I then colored it with blue chalk, and used a punch to make the little invitation. 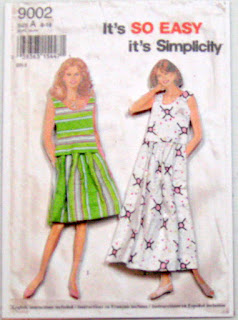 For this card I scanned an old dress pattern and then re-sized it to fit on an ATC. I made two copies. One for the background and one to be used as the paper dolls. I cut a small strip of scrapbook paper and then ran it over the edge of scissors (like curling ribbon). Then I would crumple up the paper and then smooth it out. I did these two things again and again to break down the fibers of the paper. I then gathered the paper and attached it to the paper doll for the bottom of the dress. I cut out the top and then glued it in place. I used foam dots to attach the paper doll over her image on the card. 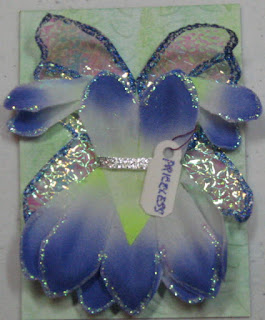 This card was made by cutting apart a silk flower. I cut a large petal section in half and used a low temp glue gun to fold the petals to the back to make the bottom of the dress. I used two petals for the dress top. I used a smaller petal section to create the sleeves. I glitter glued the outside edges with silver. I cut silver ribbon in half to make the belt. I cut the wings free-form from another ribbon and edged them with glitter glue the color of the dress. For the background I used green chalk on white cardstock and then embossed it with a tiny leaf pattern. I glued down the wings and then centered the dress on them. On a jewelry tag I wrote "Priceless", after all if you were to find a fairy's dress wouldn't it be priceless?

See You Again Soon
Kathy
Posted by Kathy at 2:13 PM