I'm hosting an ATC swap called Fairies N Magical Folk. It's my first swap and I'm really excited about it. Not only am I hosting this swap but I'm also taking part in it. Fairies are one of my favorite things. My favorite book is "The Complete Book Of The Flower Fairies" by Cicely Mary Baker. It was a gift from a friend, and it lives on my coffee table. I was really happy that someone is sending two sets of cards. That means that I can make two sets, too. It's hard to stop making these because they are so much fun to make! 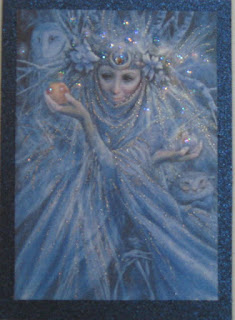 This card has sapphire vellum as the background. I then found this great image of an icy looking fairy. I highlighted some of the lighter blue with a silver stardust gel pen. Then I added extra highlights with stardust glitter glue. I finished her off by dropping a tiny rhinestone on her head dress. 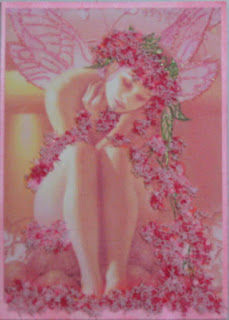 For this card I mixed pink and pearl acrylic paint together and used it to paint white card stock as the background to compliment the pink fairy. I then accented her wings with a pink glitter gel pen. I used a green glitter gel pen to bring out the leaves in her headdress and garland. Then I applied glue to the flowers on her head and the garland drape and sprinkled it with peony pink Flower Soft. 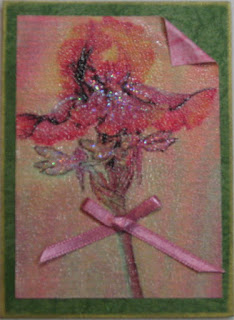 This card started with a green scrapbook paper that mimics a handmade paper. I then printed the iris fairies image on the back of a pink paper that matches the green background. I used a black glitter gel pen to highlight the fairies wrapped around the stem of the flower. I covered it with One Step Crackle. After it dried I mounted it over the green. I rolled back the top corner to reveal the pink underside. I tied a pink bow and centered it on the flower stem. I finished the card by inking the outside edge with gold ink. 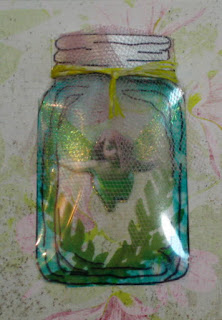 This has to be my favorite card. For years I have wanted to capture a fairy in a jar. I have finally done it! A friend of mine stamped a large mason jar on white card stock for me. I took it home and re-sized it and then printed it on a transparency. I painted the lid silver.  On the glossy side I used a turquoise permanent pen. I lifted some of the color by using 91% isopropyl alcohol on a cotton ball, to give it that transparent color that we are accustomed to seeing. I then found the perfect fairy and printed two copies of her on photo paper to make her more lifelike. I cut both copies out. On the first I left her wings. I used green Angelina Fibers over them. The second copy I cut only her body out. I layered it over the first cutout to give her dimension. I cut out the mason jar leaving tabs on the sides and bottom. I laid it on a piece of scrap book paper and marked around it carefully so that I would know where to cut the slits to slide behind the background paper. After checking the fit I was ready to glue my little fairy on the background. I then used my Wizard to cut out some little green vellum ferns to put  in the bottle with her. Then I put the jar in place. I cut a small square of pink netting and pushed it into the jar leaving a corner outside of the jar. I then made some colored baker's twine by wrapping crochet thread around a ruler and drawing lines on it with a permanent pen. I wrapped it around the jar top twice and tied it. 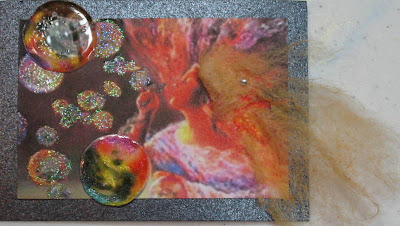 I found this picture of a bubble blowing fairy for the theme of this card. I printed two copies. I used  kaleidoscope embossing powder on each of the background bubbles. I mounted it onto a silver gray metallic paper. Then out of the second copy I cut out the two dominant bubbles. I used gel pens to enhance the scenes inside of the bubbles. Then I gave each a coat of Glossy Accents to make them shiny like bubbles would be. For her flowing red hair I stained a used dryer sheet with watercolor. After it was dry I tore a piece from the corner and pulled it into strands for her hair. I glued a small piece forward towards her face and then I glued the longer part flowing down. After it was dry I pulled the piece that was towards her face back over her hair and away from her face. I glued a small rhinestone to her hair to hold it back and into place. 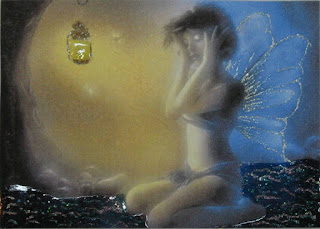 This card started as a gif file. I converted it to a jpeg file and then re-sized it and printed it. I used gold Perfect Pearls powder to give a golden glow from the lamp. I then took a bronze gel pen and re-drew the lantern. I used a drop of glitter glue as the flame. After it dried I put a drop of Glossy Accents over it to look like the glass of the lantern. I then used a silver stardust gel pen to accent her wings. I used a blue stardust gel pen to draw wavy lines in the water. I then went over it with blue glitter paint. After it dried I went back over it with the blue stardust gel pen again. I then used Glossy Accents over that to give it the sparkle and shine of water.

Didn't I say that these were a lot of fun? They really were. I got to play with so many different products. Many that I never get the opportunity to use. I really made quite the mess of my studio but I loved every minute of it.

Thanks for visiting. I hope you'll come back again soon.
Kathy