It's Christmas and what says Christmas more than angels? I really love angels, almost as much as fairies. I envy them their wings. All my life from the time I was a child I have wanted to fly. Not in an airplane, helicopter, or a hot air balloon, but all alone in the sky with wings of my own. It was fun to once again live in dreams like a child as I worked on these. 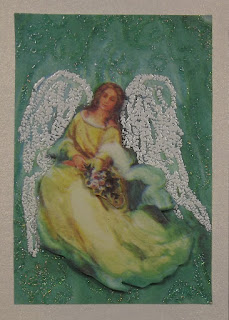 For this angel I scanned a piece of Christmas wrapping paper, then re-sized it and printed it three times. Using an embossing pen I drew in the lines of the wings and then using ivory embossing powder I heat embossed them. I used kaleidoscope embossing powder to highlight the background swirls. I mounted it on gold glimmer scrapbook paper. Then I cut around the second angel and using foam squares I layered it on top of the first angel. I then cut out the bouquet of flowers from the third copy and using foam dots I placed them in her hands. 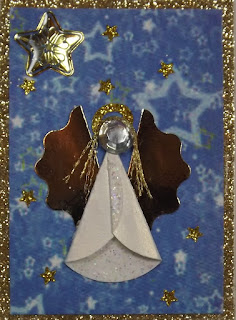 I scanned a piece of scrapbook paper for the blue star background. I re-sized it and printed it. I created the angel using a circle punch and gold glimmer scrapbook paper. I used the same circle punch for the wings. I punched them out of gold metallic paper. Then I folded them in half and then cut around the outside edge with scalloped scissors. I cut the circle in half and glued the wings onto the blue background. After placing the wings I folded the angel's body and glued it in place over the wings. For the head I used a rhinestone. The hair was made from gold thread that I glued to the head. Then I glued a halo cut from gold glitter paper  behind the head. Then I glued that in place. I punched out tiny stars from gold glitter paper and placed them randomly around the angel. I cut white card stock for the background mount and glued gold glitter on the edge. I centered the blue background over the glittered card stock and glued it in place. For the finishing touch I placed an acrylic gold trimmed star in the top corner. 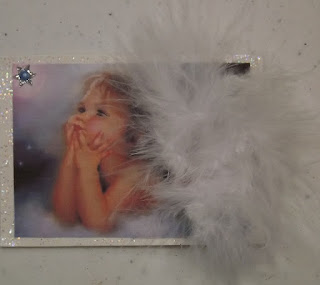 For this card I used glitter paint on white card stock. While it dried I printed the child angel. I cut and shaped white feather trim into the wings and glued it in place. Then I mounted the angel on the white glitter background. I punched the small star from silver glitter paper and then used a drop of blue Liquid Pearls for the center. When it was dry I put it in the top corner.


THESE ARE THE CARDS THAT I RECEIVED 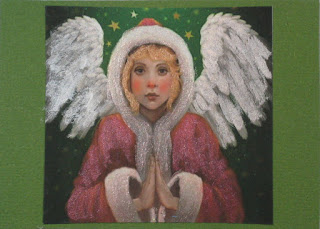 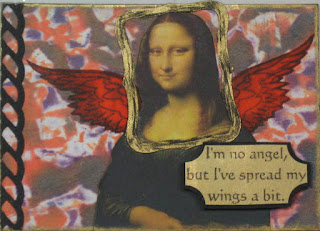 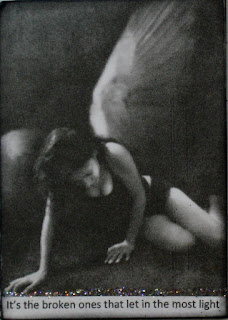 Aren't these great? Each artist interpreted their angels so differently. I love seeing the differences. Not everyone thinks of angels as glorious beings with radiant beauty, and feathered wings. I sometimes forget that.