These were fun! At first I didn't think that I would be able to join this swap. I could only find one image of Santa with elves. I asked the hostess and she said that it could be Santa and elves, or either one or the other. Once I learned this, I was off and running. 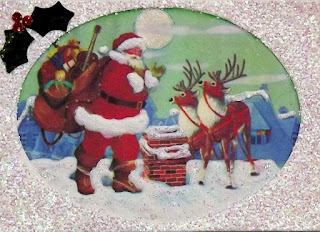 This image was taken from Christmas gift wrapping paper. I scanned, re-sized, and then printed it. I used a product called Snow Writer Dimensional Paint by DecoArt. I edged the roof tops, the chimney, Santa's suit, and then the snow on the roof with it. When it dried I went back in and used Glitter Frosting from Flower Soft to add the sparkle to the snow. I cut an oval frame from white card stock and then I coated it with glue and then put a thick layer of Glitter Frosting on it. I then centered it over the image of Santa and glued it down. I punched out two holly leaves from a green foil gift bag and glued them into the corner. I then punched out three tiny circles from a piece of red glitter paper to use as the berries and glued them in place. 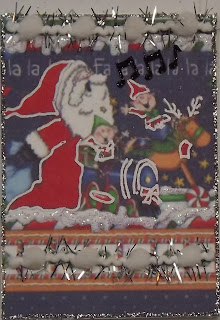 This image was also taken from gift wrapping paper, scanned, re-sized, and then printed. I used a silver gel pen to highlight some of the details. I then used Snow Writer on the snow, following it up with a light touch of Glitter Frosting. I glued white pompom with silver foil trim across the top and bottom of the card. For the finishing touch I punched out some musical notes from black glitter paper and glued them into place. 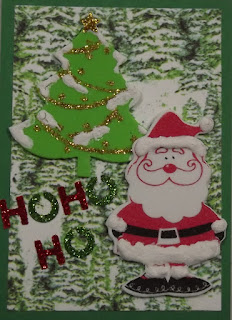 For this ATC I used scrapbook paper that I scanned, re-sized and then printed. Then I mounted it over green card stock. I found the foam Santa and tree shapes at Michael's. I touched them up a little with the Snow Writer and put them in place. They came with an adhesive on the back. Then I used a paper punch and punched out the HO HO HO from red and green glitter paper and glued the letters in place.


THESE ARE THE ATC'S I RECEIVED 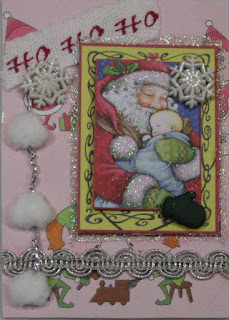 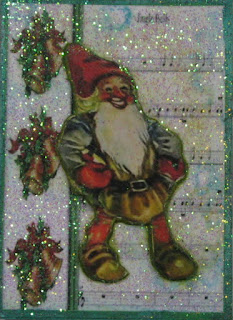 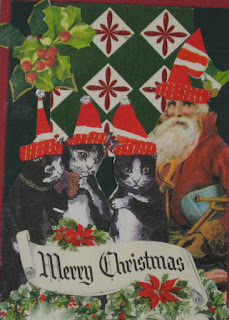 These are just adorable! Not to mention that they are also beautiful. Since the cost of postage keeps going up all of the time most of the people that once exchanged Christmas cards with me stopped years ago. These are the only Christmas cards that I received. I love them!