I have a friend that collects owls. I have been wanting for a long time to make her an owl ATC. I just had to jump into this swap. I have been thinking about owls for quite some time. I had so many ideas that I thought it would be a hoot to create some owls and it was! 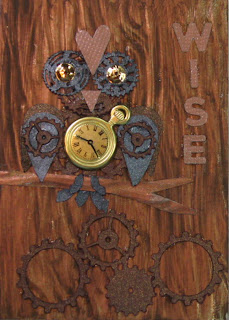 I have never really cared for Steampunk. I know so many love it. I thought that maybe if I made something Steampunk that I might have a better understanding of it, so I made an owl in Steampunk style. I started by cutting apart a pop can. I then ran it through my Wizard using a Fisar embossing plate with a wood pattern. Then I used alcohol ink to turn it copper colored. Then I used brown acrylic paint over the top of the copper colored alcohol ink. I wiped off the excess letting the copper show through the brown paint. That was the background and the branch. The gears were cut from metallic paper using a cutting file from Silhouette.The wings, crest and beak were made using heart shaped paper punches. I placed a clock brad to the center of the owls chest. I did have fun making this owl in Steampunk style but I'm still not sure what to think about Steampunk style. ??? 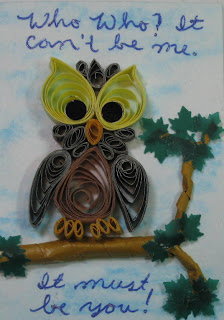 For this card I decided to do some quilling. I haven't done any in eight years. The last quilling that I did was for a baby shower gift card...that baby is seven now. The first thing that I had to do was cut the paper strips. Of all the paper strips that I have none were the right colors. The owl was made by looking at a picture of an owl cartoon. The branch is paper quilled around a bamboo skewer. The leaves were punched from green vellum. I used a gel pen to write the little verse on the card. 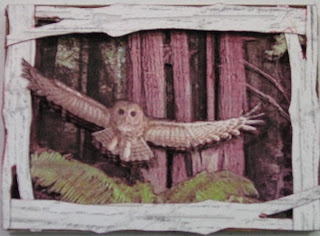 This picture doesn't really show all the details of this shadow box card. It is five layers of the same picture. For each layer a portion of the picture is cut away from one of the copies of the original, and is attached over the original using black foam strips that I made myself from craft foam and my sticker maker. The log frame was hand drawn including the streaks in the logs. This took quite some time. After I was finished with the distress and streaked paper. I printed it on card stock and then cut the log shapes. Then I inked the outside edges with brown and assembled the frame. I then wrapped the outside edges of this ATC with the birch like paper to conceal the layered construction. The last owl was then attached in place. I love this card. I feel that it is my best to date.


THESE ARE THE CARDS I RECEIVED 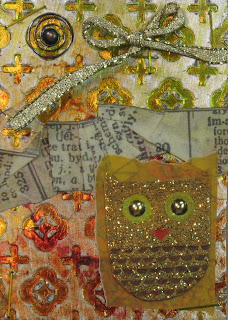 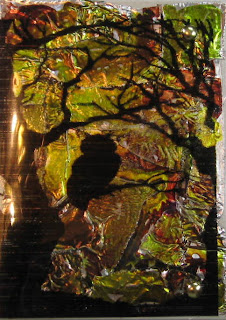 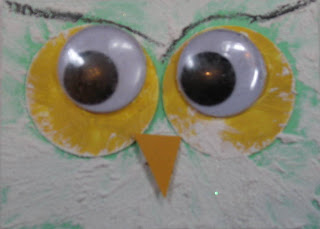 I really loved doing these owls and the owls that I received in return...well they are just over the moon wonderful!

Have a wonderful Easter and as always...
Take Care
Kathy