I joined an Art Tag Halloween swap. I have never done tags before, and I loved the ideal that the hostess Lisa Wagenhurst would be putting them together into a little book. I almost didn't join because you had to make six tags. I wasn't sure that I could come up with that many ideas. I have never been much into Halloween. I don't live in a subdivision so I don't get many Trick-Or-Treaters. In fact I don't get any. The first few years that I lived here I went out and brought tons of candy. No one came and I ended up eating all the candy myself.


THESE ARE THE TAGS I MADE

Front of tag one. 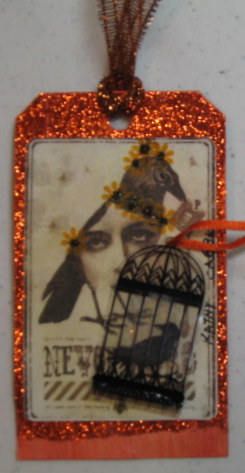 Back of tag one.

First I mixed red and yellow acrylic paint together to make orange, and painted the tag. Then I applied glue and sprinkled orange glitter on it. I re-sized both images to fix the tag. On the front I used a tiny drop of black puffy paint for his eye. I cut out a top hat from felt and added a ribbon hat band and glued it on the raven. Then I made the cane from the same ribbon. I made a slit in two places and put the cane under his wing.
For the back of the tag I used chalk to give the image an aged look. Once again I used orange glitter around the outside edges. The bottom is left without any embellishments so that it can be bound into a little book. Then I punched out tiny orange vellum flowers for the raven's hair and necklace. I put a tiny drop of glitter glue in the center of each flower. When they were dry I glued them in place. I added a tiny flower at the corner of the woman's eye. Once again I used a tiny drop of black puffy paint for the raven's eye. I then added the raven in the birdcage tied with a narrow orange ribbon. I finished the tag off with an orange ribbon tie. One down five to go. 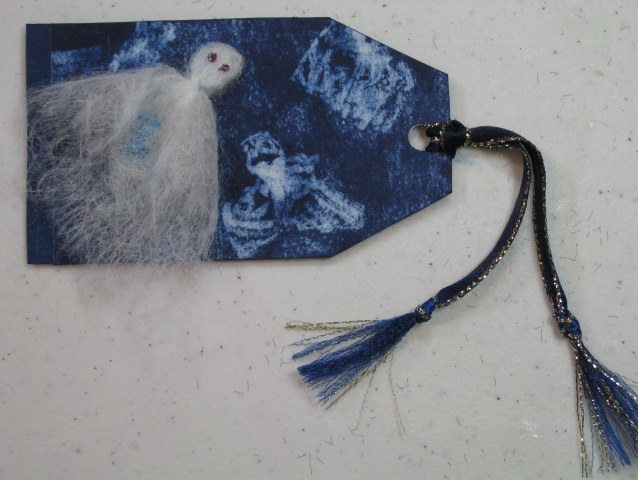 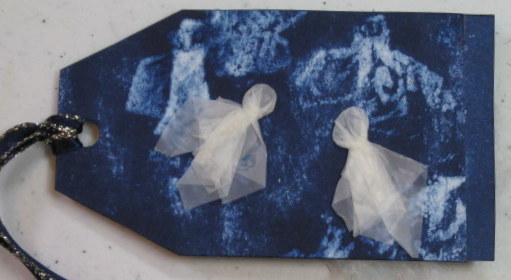 Back of side two.

For the background of this tag I cut small squares of waxed paper and then twisted them into little ghosts. I laid them onto white card stock and then laid a piece of parchment paper over the ghosts and ironed them with a hot iron. I then removed the little ghosts and using a blue dye pad all over the card stock I colored it dark blue. Where the wax paper ghosts were laid resisted the color leaving it white. For the front of the tag I made a ghost out of a dryer sheet, giving it black glitter eyes, and glued it in place.
On the back of the tag I glued in place two of the little wax paper ghosts. I then added a ribbon tie. I used a blue permanent marker to color the ribbon for the tag. Two down and counting. 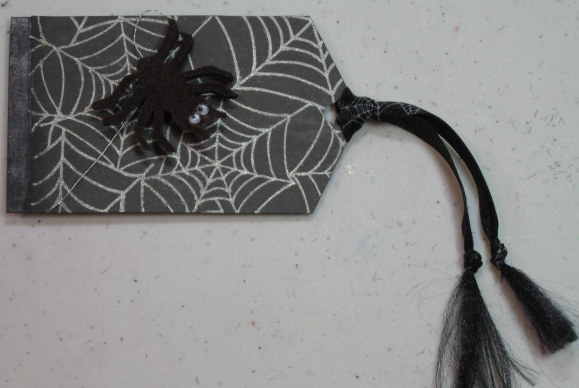 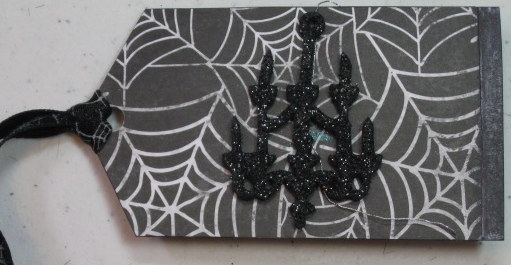 Back of tag three.

For the background of this tag I used a glue stick to adhere spiderweb scrapbook paper to both sides of the tag. On the front I traced over the web with a silver gel pen. I then cut a spider out of black craft foam. I glued google eyes on him and then I glued him onto the tag attaching a thin silver thread under him.
On the back I attached a black glittered chandelier trapping the silver thread beneath it. I then finished it off with a black spiderweb ribbon tie. Three down and counting. 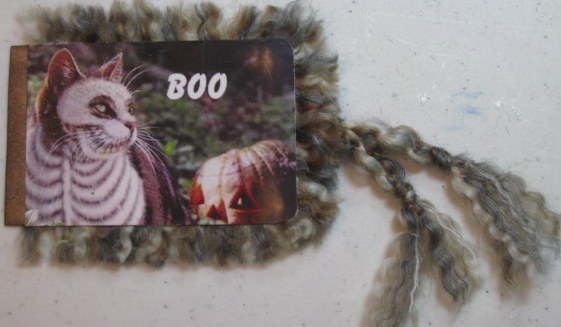 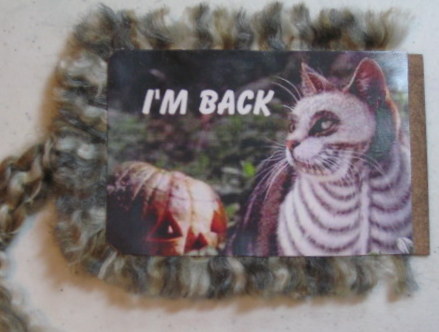 Back of tag four.


This tag started with a found image. Then I re-sized it to fit the tag. I used a ink pad to color the outside edges of the tag brown. Then I laid a piece of double sided scor-tape on my table. I cut two or three inch pieces of yarn and pressed them into the sticky side that was up. I then cut the strip down the center making two pieces, one for the front and one for the back. Then I edged the tag with the tape. Then I pulled the covering from the other side of the tape and attached the picture to the tag. Then I trimmed the yarn around the outside edge. I used a couple of pieces of the same yarn for the tag tie. Four down and two left to do.

Back of tag five.

I started this tag by gluing a sand scrap book paper to both side of the tag. Then I used this great label that I found. I re-sized it, cut it out and glued it to the front. Then I took a small square of a dryer sheet and shaped into the bag. I tied it with a piece of thread, and glued it in place.
On the back I made a mummy out of cheesecloth. I brought a couple different kinds of gauze but they all had some kind of latex or something to make them stretchy. They wouldn't fray or stain. So I used cheesecloth cut into strips. I stained the strips in a cup with watercolor added. After I was happy with the color I let them dry. While they were drying I cut the head shape out of tan card stock.I mixed white glue and water together, and dipped the strips of cheesecloth into it. I pulled it between my fingers as I pulled it out of the glue and water mixture. It was a bit messy. I never mind making as mess. In fact I think I rather enjoy it. Mom used to get upset with me for making a mess. It sure is good to be grownup and be able to make a mess without getting scolded for it. I laid strips of cheesecloth down the center for his nose and across his forehead to make his brow. Then I layered more strips over the top of them. I pressed google eyes in place and using a toothpick I pulled the cheesecloth over the top and bottom of the eyes. It was really wet so I turned my oven on to the lowest temperature and after it heated up I turned it off. Then I put the mummy head in on a piece of parchment paper and put it in the oven to dry. At one point I opened up the oven to check on my mummy head. Seeing that thing looking back at me, my reaction was "Oh My God! It's Ugly! I'm So Happy." I had to laugh. I like pretty. I never thought I would be happy to make something ugly. When it was dry I trimmed it and glued it onto the back of my tag. Using some left over strips of cheesecloth I made ties for the tag. Five down and one to go! 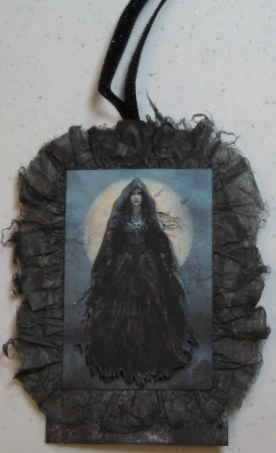 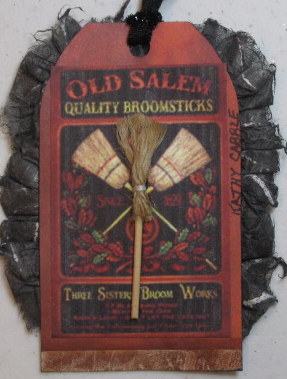 Back of tag six.


I started this tag by painting it black. Then I re-sized the image of the wicked witch and printed two. I cut out one and using foam tabs that I made from black craft foam myself, I placed it over the top of the other one. If you don't remember how I make sticky foam myself just a reminder...I run a piece of foam through my sticker maker and then I trim off the edge and run it through again on the other side. I leave it on the sticker paper until I'm ready to use it. This way I can make foam stickers any color I need. Then I sat it aside to make the ruffle. I tore a white specialty paper into strips and painted them black. After they dried I crumpled them to break down the fibers then I put a strip of glue around the edge and ruffled them as I laid them into the glue. Then I put my image into place.
For the back I used an ink pad to cover the edges. I found this great image of crossed brooms. I thought it was great the way that it said "Three Sisters Broom Works" and there was only two brooms on it. I cut a toothpick for a broom handle. Then I frayed a piece of twine and glued it onto the end of the toothpick and wrapped thread around it a couple of times. I placed it between the two brooms and glued it down being careful not to cover the lettering on the bottom of the tag. I added a piece of black glitter for the tag tie. Done! It was a journey. 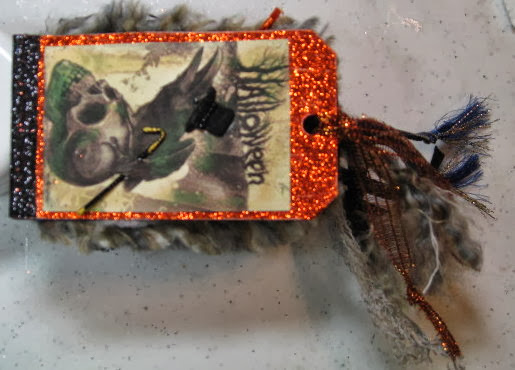 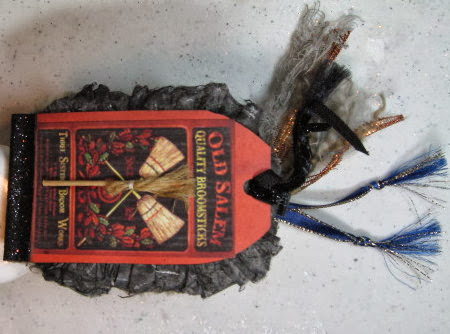 I always make two of everything. One to send and one to keep. Now I had six tags it was time to make them into a little book for myself. I used Scor Tape to stick them together. I love this this stuff, it is so strong and easy to use. You don't even need scissors. If you want you can just tear it with your fingers. For the binding I just applied Scor Tape to the backside of some black glitter ribbon and stuck it in place. How cool is that? Now all I have to do is wait to see the tag book that I get from the swap. I'm so excited. Since this is such a long blog I decided to blog my tag book now but don't worry, when I get my Halloween Tag Book from the swap I will blog that so that everyone can see it too.

Take Care
Kathy
P.S. Don't forget to leave a message below for My First Blog Give-Away
Posted by Kathy at 8:36 AM