I promised myself that I would start working on a scrap book for my granddaughter's open house. I have a little over two years to complete it in. I vowed that I would make a page each month so that it would be ready when she graduates from high school. A few weeks ago I started a new Yahoo Group called ScrapbookNook_. So far I only have one member. If you love scrap booking and feel that you could use a little inspiration this is the perfect group for you. It's a place to post your pages as well as view other people's  pages. This is my first page...it has taken a couple of weeks to finish it. At this rate I should have started years ago. 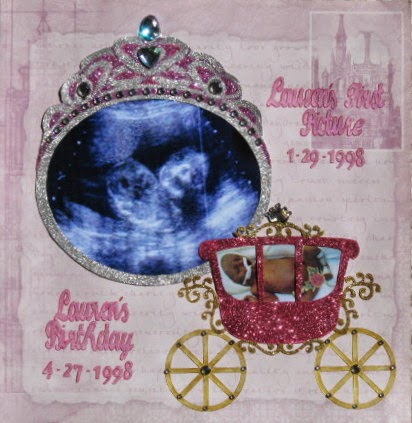 I made the crown by taking a picture of  Cindy's dog dish (my little fur princess). I tipped it on it's edge to get the right angle for the crown to form a frame. The pink areas were covered with light pink glitter and the silver areas were covered with silver glitter. I used a product called Triple Thick it's like glossy accents but it comes in a jar and costs less than the other product. Then I glued rhinestones along the band and the crown part. A heart shaped rhinestone is in the center of the crown. I then enlarged Lauren's ultra-sound picture and put it into the crown frame.
Then using my Silhouette cutting machine I cut out the carriage. I re-sized the carriage and the picture that was taken by the hospital staff the day my granddaughter was born. It wasn't a pretty picture...it was taken while they readied her to transport her to hospital that specialized in caring for premature babies. She was born ten weeks early and weighed in at 2lbs. and 10ozs. Since the picture was taken so quickly they didn't even put a diaper on her, so I found a rose and re-sized it to cover that area. I used glitter pens to outline it with. I painted the carriage a darker pink and then I painted the gold areas. I covered them with dark pink and gold glitter. I left the wheels without glitter. I put a crown rhinestone at the top of the carriage, and used rhinestones for the wheel hubs and some small ones on the rims of the wheels.
I then cut out the lettering using my Silhouette cutting machine. The top lettering says "Laurens First Picture" and the date beneath it. The lettering next to the carriage says "Lauren's Birthday" and the date beneath it. It's pretty in person but so hard to photograph because of all the glitter and bling.
Now I have to start working on February and March's pages. I hope that I will be finishing the other pages before the end of April. Somehow I don't feel confident that I will get caught up anytime soon. It's not that I don't want to work on them...it's just finding the time.
I hope you enjoyed seeing this page. I really did enjoy working on it. If you would like to join this group leave a comment or email me at ozmudder@hotmail.com or go to scrapbooknook_subscribe@yahoogroups.com

Take Care
Kathy
Posted by Kathy at 6:02 AM